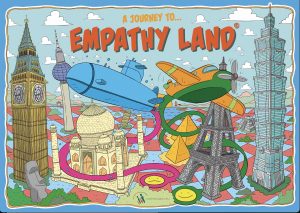 Welcome to your journey to Empathy Land! This is a fun game that will help you discuss habits at home that may be culturally driven or just family habits. The purpose of the game is to generate an intercultural dialogue between families, friends, neighbours and colleagues. Of course, within your own family, the game can also be played without the cards. However, it is also fun to imagine the habits of friends or neighbours when you draw a card.  Whomever reaches Empathy Land first wins. During the journey it is fun to discuss the landmarks you pass. You may have visited some and others you may want to put on the bucket list. Who wants to go where?  With smaller children you can neglect the cards and just focus on the landmarks.

In its original version, Empathy Land is an interactive board game played by three to six players. Through sharing habits and guessing whether these are true or false, the players gain awareness and understanding about each others’ at-home habits.

Players: 3 – 6 players per game board

The aim of the game is to get to know each other better and to discuss differences in usage and habits. Differences that may just be there and which are fun and useful to know of each other.

Rolling the die and point system:

Moving around the gameboard:

Step 3: Optional Discussion after the gameplay