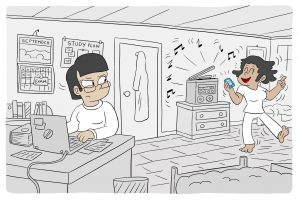 It’s already been three years since Xiao moved from China to Germany. She likes it there. The past two years she’s rented a room in a small townhouse for students. She’s living on the ground floor together with a roommate, and there are three more floors housing six more flatmates. Xiao loves the fact that she has her own quiet space which makes her feel at home.

At a certain moment in time, however, the girl who rented the same room as Xiao found another, bigger room in Stuttgart and moved out. So, Xiao gets a new housemate from Perù, Maria. Maria and Xiao got along first but then a problem started to appear.

Xiao: What is wrong with this woman who just moved in with me? I need to prepare for my exams because I will graduate with my Master’s soon. I can hardly focus on studying due to the noise she’s making all the time. I’ve tried to talk to her before but now I feel it is impolite to ask her again since she is way older than me. She does not seem to care!

Maria: Oh, I love Stuttgart! It’s so peaceful, and there are so many places to discover! At the same time, I miss my home a lot, especially my kids and my family. I try to speak to them on the phone as much as I can, and I am doing my best to make this place feel like my second home. The younger students in my house seem a bit sensitive. It seems they’ve not yet learned to live a happy life! I will do my best and tone down my music a bit but I cannot stop talking to my family.

To feel at home, Maria started playing music in her room and talking on the phone every day, which was heard in every corner of the house. She is used to very lively surroundings including people talking, laughing, or arguing, and with music playing around her all the time. Both Maria and Xiao hardly realize that sound can be differently experienced in different parts of the world. Even though both roommates try to be considerate of each other, their understanding of loudness is too different to meet midway. On top, Maria was the oldest of the house and even though she was new, she considered her housemates too young and inexperienced in life. For those reasons, Maria adapted her behavior only very slightly and the problem remained.

The first step for both roommates is to realize that there is a wide gap between what people experience as appropriate loudness. Being surrounded by music may be lovely for one, creating feelings of belonging and happiness. For others, loud music may lead to irritation, concentration loss, or stress. Becoming aware of this difference may help them understand what the music means to the other person.

The second step could be a ”noise schedule”. This means that Maria and Xiao would agree on certain times in which Xiao can study quietly, and other times in which Maria can play music and talk on the phone as loud as she wants.

At the same time, noise disturbance is as old as humanity itself, also among people from the same culture. Hence people need to negotiate some basic rules. In this case, there were already rules set by the landlord, which were not followed by Maria. This may have to do with the difference in age and feelings of authority. Having a meeting among all renters of the same house to establish the rules and/or reinforce the existing rules might convince Maria.

In terms of the Hofstede model, there are several cultural dimensions (or basic differences) at play in this story. The difference in experiencing sound as appropriate is largely due to two dimensions: collectivism and indulgence. In general, people in Peru (collectivist) are more involved in each other’s lives. They’re talking, arguing, listening or playing music a lot, while people in Germany (individualist) keep an on average more to themselves. Also, Xiao comes from a collectivist society as well (China). Further, another difference between Xiao and Maria is found in the sixth dimension of Hofstede: the indulgent cultural trait in Peruvian culture versus a more restraint, a disciplined trait in Chinese culture. In a more indulgent culture, we observe a relatively free gratification to follow the human impulses for enjoying life and having fun. In a more disciplined culture, people may need longer to open up.

Finally, we’ve seen that an age difference hindered the dialogue and finding consensus among the housemates. This points into the direction of power distance. Maria did not agree with her younger housemates having the authority to enforce the rules of the house on her. The authority of a strong majority of votes, or the authority of the renting agency might help.