Quickly after arriving in the Netherlands, Hanan goes to the immigration office to ask if she can work for two evenings per week at a local Lebanese restaurant. She has the right experience, because back home in Aleppo, her family runs their own restaurant..

Hanan: I’m proud to have found a job so I can earn something and start making a decent living again. But the young lady at the immigration office said she didn’t know the answer and would get back to me. Is this the right person to talk to? The officer doesn’t seem to know her own rules. Does she have the proper authority? Is she capable of being an officer?

Case officer: This is the first time that someone asks me if he/she can work so shortly after arriving here. That is great, but I’m not sure about the rules for working and earning money. So I better double-check before I give her a wrong answer and get her into trouble.

Hanan may understand that the case officer is appreciated in the Netherlands for her honesty, when she says she doesn’t know the answer. This is no reason to question her credibility. Hanan can expect the lady to come back to her with a clear answer by next week. The case officer might explain to Hanan in a bit more detail how she will get the answer and what she will do to get it right.

The Netherlands has a culture with a relatively low avoidance for uncertainty. The case officer does not know something and so tells Hanan in a direct manner that she doesn’t know. Hanan expected an official who knew every little detail concerning her tasks, or at least somebody who wants to be perceived as knowing it all,  offering certainty to her clients. This certainty is not perceived necessary by the Dutch case officer, but she will find out the answer soon enough. Hanan can be sure there is nothing to worry about. 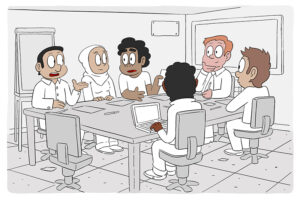