Zayed: Is that a leading politician? He is dressed so casually! And on a bicycle? He cannot be as important as I thought. But why is the director of our language center so welcoming and why did all these journalists appear?

Politician: Yes, lovely little ride and those OV bicycles from the train stations are very handy indeed. I’m also glad I chose to wear my jeans. I wouldn’t feel comfortable at all in a suit.

Zayed, coming from Syria, is used to powerful persons showing their success and status with expensive cars and clothing. These symbols demand respect and will make followers act more respectful.. In the Netherlands, leaders will not lose standing because of their clothing or means of transportation. They will dress to the occasion and the politician did not want to stand out among the students of the language center. He probably thought that the students would feel more at ease and equal to him if he dressed casually. He probably also feels confident that his interest and his message is more important than his clothing. The politician used public transportation, and a public bicycle was the most efficient way to reach the center. Efficiency is more important than status in Dutch culture.

With this knowledge, Zayed could re-interpret the clothing and bicycle and understand it in the way it was meant: as an invitation to feel at ease and equal. Knowing that many of the students at the language center are migrants, and that they may feel more respected by formal dress, the politician might want to rethink what to wear, according to his interest and message he wants to get across. Finally, the person who invited Zayed to be on the welcoming committee, could have explained the egalitarian culture of the Netherlands, where people with power and standing do not display their rank and position. In fact, they often like to do the opposite, and just act “normal”.

The Netherlands has a culture with a low power distance (PDI) and high femininity (FEM). It is a very egalitarian. The task of the politician is to represent the point of view of his followers and convert this into action. Clothing and status symbols are not important and can even be frowned upon if a person shows-off his success, power or possessions. Zayed comes from Syria, a culture with a high power distance. Most people expect leaders to have, use and show their power. Their culture is also more performance-oriented than that of the Netherlands. Fashion, large cars and an entourage of assistants support success and power. 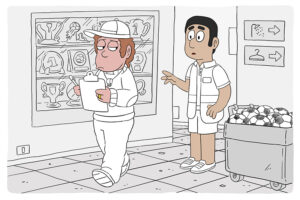