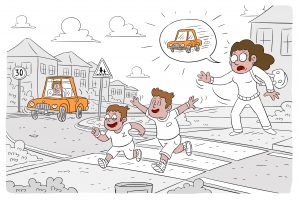 Martina came from Italy to Germany, before she started working as an Au Pair for a family with two children. Peter is 3 years old and Jan is 8 years old. Martina is very kind and caring but tends to get easily worried. As an Au Pair, she feels responsible for the boys who are under her care. One day, they were excited to play at the playground across from their home. When Martina opened the house door, the two started running quickly across the street. None of them looked left or right before crossing. Martina was scared and yelled at them for being careless.

Martina: Jan is old enough to take care of himself. He even goes to school by bus on his own. It’s so impressive that he does that at only 8 years old. In my country, this would never happen. On the other hand, Peter is just too young to do anything by himself and wants to imitate his brother in everything he does. I feel like I need two extra pairs of eyes in order to be able to take care of him as it should be done.

Jan: Martina is nice. We are so happy we have such a cool person to take care of us, but sometimes she just gets angry for reasons we don’t know why. Our parents allow us to do everything but she doesn’t. It feels like she is always afraid of everything, while mom and dad let us do pretty much anything. We have been allowed to do whatever we wanted by our parents.

Jan and Peter live with their parents in Duisburg, an industrial city near Dusseldorf. Right outside the door of their house is a pedestrian crossing. The brothers feel safe when they cross the street because they are used to the car drivers that slow down for the pedestrian crossing. Martina is not aware of this traffic rule. She saw the children running out of the house and crossing the road without looking out for cars, she got afraid and angry at the same time. At this moment, Martina thought of all the possible dangerous situations that could have happened.

Although culture is part of the root cause of this misunderstanding, it is not easy to find a real ‘solution’ here, since we’re talking of a situation that Martina considers truly dangerous and she is right to feel responsible for the safety of the children. It might be wise for her to realize that what is considered ‘dangerous’ is perceived differently in different cultures. A next step would be to try to restrain her anger towards the children a little bit. That way she can save some space to maneuver for the moments which are really dangerous. But then again… what is truly dangerous to her may not be perceived truly dangerous by the children or their parents.

Martina could also talk to the parents about this difference in perception of danger. The parents would possibly be able to explain that the crossing is actually less dangerous than she feels it to be. At the same time, the parents may also give permission to teach the children that they should wait and watch the traffic at any crossing. After all, a crossing can be safe 99,99% of the time but watching traffic before crossing is always a wise thing to do. On top, Martine might want to ask the parents whether she can teach Jan to look after his younger brother, or whether the parents don’t want to put this burden on their eldest son.

The cultural difference in the perception of danger is caught up in the fourth dimension of Hofstede, which is called uncertainty avoidance. To put it shortly, parents in a culture with less uncertainty avoidance teach their children to go out and explore the world; while parents in a culture with a high uncertainty avoidance more often have a tendency to warn their children of the dangers in the world. As a result, Martina feels the children she’s looking after are too free and don’t take all the dangers into account. Each incident truly shakes her and there is quite some chance that she will experience more of these small shocks. That is part of whom she has become by her own upbringing, and the emotion will be present before the mind recognizes it. Generally speaking the population in Germany averagely scores quite high for uncertainty avoidance, as compared to other countries in the world, but this is even more true for the Italians. The difference between these two countries is significant and therefore noticeable by Martina and her host family. It will be best for them to continue to communicate openly about this without judgment either way.