Han and his family have been in the Netherlands for a while. They have finally settled into a nice neighbourhood, even though it is very different than their home back in China, and quickly meet most of their new neighbours.

Han: Our new neighbours are very friendly. When I see them on the streets or in my shop, I talk to them. Some of the neighbours ask about my country and my family that is still there. It makes me happy to share. One day, I invited a neighbour and her family to my house and promised to make real Chinese tomato soup. But they haven’t come over, and they haven’t even responded.

Neighbour: China is often in the news, so when I saw Han I stopped to ask whether he still had family there and how they were doing. He invited me and my family over for dinner. I hardly know him, so I was very surprised by the invitation. It was awkward for me. I said we’d think about it but now I feel obliged and don’t know how to talk to him anymore.

Han invited the neighbours for dinner because he had the impression that the interest could lead to a friendly relationship. The invitation to his house would strengthen that relationship and it would include the rest of his family as well. In the Netherlands, people make a clear distinction between acquaintances (contacts at school, in the shops, at work) and friends. Friends are invited to their house, while acquaintances aren’t. So while Han was simply trying to get to know his neighbours better, this is too quick and too close for the Dutch neighbour.

The Dutch neighbour could accept the invitation if she feels comfortable. Often, these dinner invitations turn out to be very interesting and the start of a solid neighbourhood friendship.

If she doesn’t feel comfortable, she could suggest to have a picnic in the park where both families bring some of their traditional food. That would avoid building the expectation that they have to invite Han’s family in return, which is a common response in the Netherlands. If you are invited to someone’s house, there is an unspoken expectation that the invitation will be reciprocated at some point.

The Netherlands is an individualistic culture. So for most Dutch, there is a difference between public life (work, school, sports clubs etc.) and their private life (friends and family). The interaction with the first type of relationships is in public places, e.g. cafes, parks, shops. Generally, only friends and family are invited to a house. A similar logic applies for meeting the family: Friends are introduced to the family, acquaintances are not. The fact that the Dutch ask about your story and your view, doesn’t make you friends, rather just friendly acquaintances. This is just the way it is in their world. 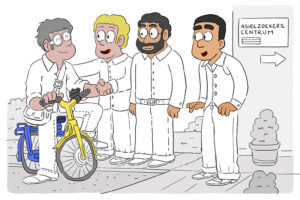