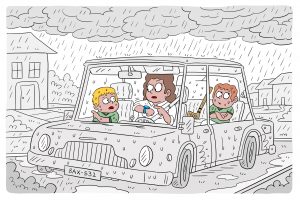 Alexandra was born in Athens, Greece. Last year, she decided to follow a dream of hers: She applied to become an Au pair in the Netherlands. Only a few months later she found a host family that lives outside of Amsterdam. The host parents are ambitious in their careers. They chose to live in the suburbs so that they can feel comfortable giving their children, who are now 15 and 16-year-old, more freedom growing up while they are at work. Last week, Alexandra brings the brothers to their weekly hockey training. She drops them off in the parking lot, and they agree to meet on the spot again after the training at 21:00 o’clock. Alexandra arrives five minutes earlier to make sure the boys will see the car when they leave the gym. It was raining a lot on that day. Ale expected the brothers to be a bit later than usual. After half an hour of waiting in the car, she was very worried. After 45 minutes, the brothers finally came out of the gym and jumped to Alexandra.

Alexandra: Those kids are so nice and active. I really like them. The only thing is that sometimes they do not understand the responsibility I feel when taking care of them, I mean they just do not understand how many things can happen and they do not worry about it or they do not worry that I could possibly worry about it. We agreed on nine! I have been waiting for them in the car for 45 minutes and they did not even think about sending me a message to tell me that they were later than usual.

Remco: We had to bring all the hockey training stuff back in the garage, it was our turn to do it. When we got into the car after finishing our tasks, Alexandra was really angry at us and she said that we have been selfish in not letting her know we would have been late. I don’t understand that. We were at the hockey field, it is a safe place. Alexandra left us here at the beginning of our training, why should she worry that we are no longer here? Sometimes she panics without a reason.

It seems from this story that Alexandra has a different perception of danger and on what is agreed to than the boys have, and probably also than the parents have. Alexandra feels very responsible and since she can envisage dangers coming from several sides, she needs to know what is going on with the children. The boys, on the other hand, can’t imagine any bad thing happening to them while they are doing their chores at the hockey field, and, being young, they actually forgot it themselves so they had not informed Alexandra beforehand. It also didn’t occur to them to switch on their phones to tell her they would have been late. They should agree to inform her in case their schedule changes, not only for hockey but for any activity that she supports as a chauffeur.

The best solution is probably for Alexandra to realize she has a different perception of structure and danger than the boys and their parents. There’s no reason for getting angry and hopefully, Alexandra can hold a temper a little bit. Even if she doesn’t, it is important at a certain stage that she tells the boys in a calm way that she gets very worried at instances like these. In doing so, she can tell them that it is very important to her to inform them when plans change. Therefore she can ask them to think about this next time. It will be best for them to continue to communicate openly about this without judgment either way.

The cultural difference in the perception of danger is caught up in the fourth dimension of Hofstede, which is called uncertainty avoidance. To put it shortly, parents in a culture with less uncertainty avoidance teach their children to go out and explore the world; while parents in a culture with a high uncertainty avoidance more often have a tendency to warn their children of the dangers in the world. As a result, Alexandra feels the children she’s looking after are too free and don’t take all the dangers into account. She experiences more anxiety. Each incident truly shakes her and there is quite some chance that she will experience more of these small shocks. That is part of whom she has become by her own upbringing, and the emotion will be present before the mind recognizes it. Generally speaking the population in the Netherlands scores relatively low for uncertainty avoidance, while the average for people in Greece is very high. (Hofstede, Hofstede, Minkov, 2010; Cultures and organizations, Software of the Mind p200-201)

Read the next story
A walk to the playground
Martina came from Italy to Germany, before she started working…