Manny knows he’s a pretty good looking guy, and at 19 years old, his focus is pretty centered on girls. Since moving to the Netherlands from the Philippines last year, he’s curious to know more about the Dutch women in town. One day, he’s walking by a terrace full of people, and a young Dutch woman looks him in the eye and smiles at him.

Manny: my heart jumped when she smiled and I figured that she may be interested to get to know me. So I returned to the terrace and sat down next to her to start a conversation. However, her smile was gone, she seemed angry and told me to leave! I don’t understand, why did she smile in the first place, is she playing with me?

Woman on the terrace: I was enjoying a coffee and some sun on a terrace, while a young man walked by. I liked his jacket, it looked like the one a good friend of mine also wears. So I smiled at him, but then he came over and just sat down at my table! I felt a bit threatened and told him to leave. It wasn’t my intention to be rude, but I want to feel free to smile at people if I want to, without having any intentions.

There’s no way of knowing why a young woman smiles at a young man. Maybe he is good looking, maybe she wanted to appear welcoming to someone who looked like he was new  to the Netherlands, or maybe she just likes his shoes. Who knows? It is important to note that Dutch women can have eye contact and exchange a smile, without creating any expectations from men. Both a woman and a man are free to pull themselves out of a conversation or a relationship at any time.

Manny could understand that the smile and eye contact of the young lady does not necessarily have a deeper meaning. He might have walked on, or chosen to sit further away on the terrace and see if the lady starts talking to him. He might also have asked if he could join her before sitting down. In order for Manny to get to know Dutch women, he would need to offer his friendship first, without having any expectations. Often these contacts are easier at sport clubs or through friends of friends, rather than initiating contact in public spaces.

The Netherlands is a country with low Power Distance (PDI -) and low Masculinity (MAS -). The high value of egalitarianism, combined with a few feminist waves in the last century, has created more or less equal relationships between the sexes. Women and men feel that they largely have the same rights, and both are free to make their own decisions in the field of relationships, sexuality and marriage. The males in the family (father, brothers or others) will not easily get involved if a woman contacts other men. If parents really disagree with the choice of their child (male or female), they will argue and put pressure, but they cannot forbid. 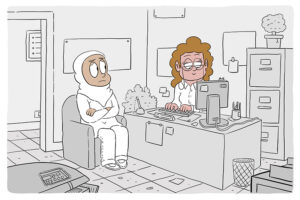 Hanan gets no answer
Quickly after arriving in the Netherlands, Hanan goes to the…