Adebiyi and his wife Adeola have been in the Netherlands for a while, after making the complex decision to leave their home in Nigeria. They started a shop and moved into a nice flat in an apartment complex, where all the front doors are lined up along a balcony.

Kees, the neighbour: We met Adebiyi and his wife on the day they moved in. We quickly had a friendly basis with them. But after a while it became a habit that they invited people over and then they would have long conversations outside their front door when the guests left – often very late. I told Adebiyi that this kept the neighbours awake but nothing has changed.

Adebiyi: When we have friends and family over, we talk about old times, new plans and sometimes sing songs from back home. This feels good, we don’t look at time at such moments. Having friends and family over and being together is very important and I can’t imagine this can be disturbing to others. My neighbour mentioned that it wakes him up and I try to take it into account, but why can’t he be happy for us that we’re having a good time after all we’ve gone through?

Adebiyi and his wife are trying to build a new life in a new environment: they have a home, a shop and want to fit in. But they also miss their old life, so they meet with friends and family as often as possible.

The general understanding to keep it quiet after ten pm is common in the Netherlands and it annoys the neighbour that the talking on the balcony wakes him up. Unless someone explains this rule to Adebiyi, he has no idea that it is expected of him in his new neighbourhood. He may upset his neighbours without even realizing it. And even if it has been explained, it may take a while for Adebiyi and Adeola to feel this rule to be important. In their daily life in Nigeria, talking to people is part of a normal, healthy life, no matter what time or where.

After the neighbour mentioned the noise level at night, Adebiyi is trying to keep it down. If it’s not quiet enough, they can agree a signal that Kees can use, e.g. send a message or call Adebiyi.

Adebiyi can also explain to the neighbour how important it is for himself and for Adeola to meet with friends and family. And then invite the neighbour as well. That will increase Kees’ understanding, but not the neighbours sleep, so an agreement on ‘noise signal’ is very important and Adebiyi should comply to this as much as possible.

Besides that, Adebiyi and his wife should try to finish all conversations inside the flat, not outside on the balcony where everybody can hear it.

Generally, Nigeria has a more collectivist culture. Frequent interaction with friends and family strengthens the community and everybody’s position in the group. Establishing and maintaining these relationships can’t be done in a specific time frame, so it can last until late at night. Greetings and farewells are important and can last longer than in other types of cultures.

In an individualistic society such as the Dutch, people try to schedule a time for friendships and understand when the time for interaction is over. The greetings and farewell rituals are short and less emotional as they aren’t essential to defining the relationship. 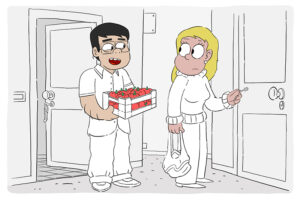